THE Peoples Democratic Party on Monday accused the Imo State Governor, Hope Uzodimma, and a former governor of the state, Rochas Okorocha, of turning the state into a war zone.

The PDP spokesperson in the state, Ogubundu Nwadike, in a statement on Monday said the clash between the supporters of Okorocha and Uzodimma on Sunday at Royal Spring Estate, Owerri, was “disgusting”.

Nwadike spoke on the heels of the disagreement between Uzodimma’s administration and Okorocha who is currently the lawmaker representing Imo West in the Senate.

The statement alleged that the actions of Uzodimma and Okorocha were causing tension and apprehension in the state.

The statement read, “It is highly disgusting that the present APC government in the state has turned Imo into a terror zone and theatre of war and conflict. In recent times, Imolites have had the most tragic and excruciating experience ranging from the recent military invasion of parts of Orlu and Orsu local government areas, which caused insecurity and other forms of gruesome attacks, leading to breakdown of peace and order, and loss of lives and properties.

“The recent violence perpetrated by supporters of Senator Rochas Okorocha and Governor Hope Uzodimma has stirred up tension and apprehension in the state, thereby toppling the atmosphere of saturated peace and tranquility.”

Okorocha aide slumps in court, gets bail along with others

‌Meanwhile, an Owerri Magistrate’s Court was on Monday thrown into confusion when one of the 14 aides of former governor, Rochas Okorocha, named Darling Ibekwe surprisingly lost consciousness and slumped while being arraigned before the court.

The 14 of them who were loyalists of former governor Rochas Okorocha, representing Imo West in the Senate, were arraigned for allegedly breaking into the premises of the sealed estate said to belong to the Okorocha’s family.

They were accused of conspiring among themselves to flout an existing order issued by the state government by removing the seal of the state government and entering into the sealed premises of Royal Spring Palm Hotel and Apartments belonging to the wife of Senator Okorocha-Nkechi Rochas Okorocha.

Specifically, Ibekwe was also accused of publishing a recorded defamatory issue on the social media with an ulterior motive to malign the reputation of the state government and the personality of Governor Hope Uzodimma while Olu Chizoba was charged with unlawful possession of a double-barrel pump action gun without licence.

After six counts were read to the suspects, counsel for the defendants, Eddy Onyema, pleaded for their bail, promising that they would not bolt away if granted bail and would return to the court to take their trial.

Onyema argued that none of the charges preferred against the defendants was a capital offence.

Ibekwe, slumped when the Magistrate, B. U. Adikaibe, returned to the courtroom for her ruling but was revived by his fellow suspects, who pleaded for water with which he was revived.

The court later granted all the 14 accused persons bail with N5m each amounting to N70m, which the court said must be fulfilled before they would regain their freedom.

Also, the state Commissioner for Lands, Survey and Physical Planning, Imo State, Enyinnaya Onuegbu, on Monday told the presiding magistrate of Court 4, B.U Adikaibe, that the 14 loyalists of a former governor arraigned by the police were threatening his life.

Onuegbu said, “Your lordship, I want to put on note before this honourable that my name is Enyinnaya Onuegbu. I am the honourable Commissioner for Lands, Survey and Physical Planning, Imo State. I want his lordship to note that this defendants you have granted bail have been threatening my life and that the members of my family.”

The magistrate asked the commissioner to formerly present the matter, which he (commissioner) agreed to do.

The matter was then adjourned till March 18 after granting the defendants N70m bail.

However, the Imo State Government on Monday gave reasons why Okorocha, was let off the hook at the state Police Command around 11.30 pm on Sunday.

Speaking with our reporter, the state Commissioner for Information and Strategy, Declan Emelumba, said that Okorocha was released by the police on “medical grounds.”

Emelumba, said that the release of Okorocha didn’t mean he won’t answer for “the offence he committed.”

He added that Okorocha “was stooling consistently and he was asked to go on medical grounds.”

Emelumba said, “Okorocha was released on Sunday by the police on medical grounds. The man was purging and stooling consistently, the police had to release on medical grounds to enable him to take care of his health. His release doesn’t mean he will not answer his case.”
Presidency intervened, says Okorocha

But Okorocha, who reacted to the claim while addressing his supporters at his Spibat mansion in Owerri on Monday, said that the Presidency intervened in the matter.

Okorocha also said Uzodimma might not end well as a governor, adding that the governor had governance, but “is now pursuing shadows.”

The ex-governor said while insecurity was ravaging Orlu area of the state and civil servants not paid, the governor had decided to launch “an attack on me and members of my family.”

Okorocha said, “The way Governor Hope Uzodimma is going, he may not end well as governor. Insecurity is ravaging Orlu. Over 10 houses were burnt in Oguta yesterday (Sunday). He knows what he is doing; he wants everybody to fear him. Instead of him to face governance and pay salaries and security in the state, he is busy chasing shadows of violence.”

He called on the inspector General of Police to immediately arrest Uzodimma’s Special Adviser on Special Duties, Chinasa Nwaneri, and Senior Special Assistant on Youth Affairs, Eric Uwakwe, who he alleged led thugs to attack him at the estate.

In a related development, a former commissioner for Youths and Sports in the state, Kenneth Emelu, has said “no power will stop” Okorocha, from succeeding Muhammadu Buhari, as the next president of Nigeria.

Emelu, who spoke when a crowd of supporters visited the former governor (Okorocha) at his Spibat mansion in Owerri, said “no power in Africa, even in the world” would stop a man whose time has come.

He expressed optimism that Okorocha would emerge the next president of the country. 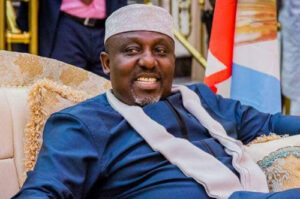