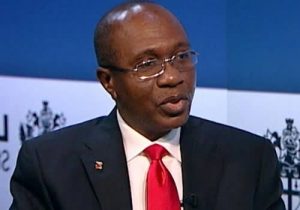 Senior lawyers and top politicians, who spoke separately to The PUNCH, stated that Emefiele’s continuous stay as the CBN governor was dangerous to the economy.

They said this as the Chairman of Ward 6 in the Ika South Local Government Area of Delta State, Mr Nduka Erikpume, in a telephone chat with one of our correspondents on Sunday, said the CBN governor had registered as an APC member.

When asked whether Emefiele had registered in the APC, Erikpume said, “Yes, he has registered since February 2021. He is our member.”

Amid widespread condemnations of his alleged presidential ambition, The PUNCH on Sunday learnt that the CBN governor had headed to a Federal High Court in Abuja to seek a constitutional interpretation on his non-resignation while pursuing his political interests.

Sources said that the CBN governor had reached out to a constitutional lawyer and human rights activist, Dr Mike Ozekhome (SAN), to seek interpretation of the constitution and public service rules on public servants seeking elective positions while in office.

A highly placed source in the CBN told The PUNCH that the case had been scheduled for today (Monday).

He said, “Emefiele has just briefed Chief Mike Ozekhome (SAN) as his lawyer. He has just filed a case in court and is coming up tomorrow (today, Monday).”

Several efforts by The PUNCH correspondent to get the reliefs being sought by Emefiele from the source proved abortive.

Although the details of the suit were still sketchy Monday night, another source in the APC said Ozekhome was taking up the matter “for certain constitutional interpretations.”

But the CBN governor, in a tweet on Saturday, said he was still waiting for God’s direction, adding that he would purchase the N100m forms himself if he entered the presidential race.

He said that he would continue to serve the country in his capacity as CBN governor until he received divine counsel to contest for a higher office.