While Real have been trying to sign Kylian Mbappe from Paris Saint-Germain, it is another exciting French talent who is heading to the Spanish capital.

AMILOADED had earlier reported that, Camavinga, who is 18 and has been capped three times by France, has signed a six-year deal at the Santiago Bernabeu.

“Real Madrid C.F. and Stade Rennais F.C. have reached an agreement over the transfer of Eduardo Camavinga, who joins the club on a six-year deal, until 30 June 2027,” said a statement on the Madrid website.

No fee has been published but according to media reports, Real have agreed to pay 31 million euros ($36.6m) plus nine million more in add-ons for a player who was in the final year of his contract in Brittany.

17, he made his France debut as a substitute in a 4–2 win against Croatia in the UEFA Nations League, becoming the youngest player in the national team since Maurice Gastiger in 1914.

A month later he made his first start for the national team and scored his first goal in a 7-1 win over Ukraine. 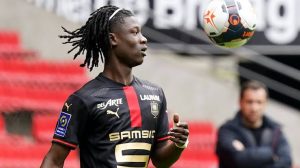