A courtroom in Abeokuta turned dramatic on Tuesday after members of the Osugbo Society sued for “hijacking” the body of a late monarch stormed the courtroom hearing in ritual attire.

They chanted ritual songs in a grievance against the litigation against them.

Family of the late monarch in Ogun State, Oba Rauf Adebayo Raji-Suleimon dragged members of the Osugbo society in Ijebuland before a Federal High Court sitting in Abeokuta, for allegedly hijacking and taking into their custody the corpse of the traditional ruler who died in January this year.

Raji-Suleimon, who was the Alaye – Aba of Aba Ayepe, died on January 22, but his body was forcefully removed from the custody of his family by the Osugbo society.

In a matter of fundamental rights brought before the court against the traditionalists, the family members labelled the act as an infringement of their constitutional and fundamental rights “to dignity to accord their father a dignified burial and funeral rites in accordance with Islamic injunctions.”

The family said the monarch was a practising Muslim until his demise and his burial should be according to Islamic dictates.

The suit marked, FHC/Ab/FHR/20/21 was filed (for and on behalf of children and family of the monarch respectively by Aderonke Egunjimi, Tiwalade Abass and Adeyemi Joseph.

Joined in the suit are fifteen members of the Osugbo society of Ijebuland and the Ijebu Traditional Council as the 16th respondents.

A copy of the Originating Motion On Notice obtained by Daily Trust, indicates the family is demanding N50 billion in damages for infringing on the rights of the late monarch and the family.

Counsel to the family told the court he had not been able to serve all respondents to the case.

The court has granted an order of substituted service on the defendants to be served in three weeks.

The hearing continues on April 26. 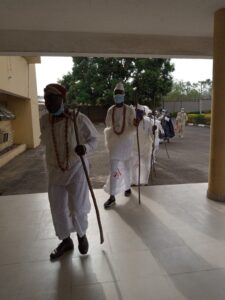 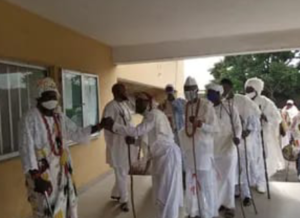