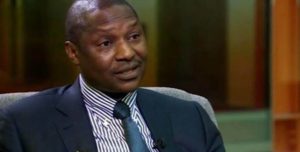 President Muhammadu Buhari Friday pre-empted his ministers who can ndicaan ted interest in vying for presidential and other positions by sending them fo h w le they were contemplating whether to resign or not.

The president bid farewell to outgoing members of the Federal Executive Council (FEC) at a brief ceremony held at the Council Chambers of the Presidential Villa, Abuja.

However, the Attorney General and Minister of Justice, Abubakar Ma,lami, and the Minister of Labour and Employment, Senator Chris Ngige, have made a u-turn.

It was learnt that Buhari had told Malami to shelve his ambition of vying for the governorship seat of Kebbi State and remain in the cabinet until 2023.

On other hand, Ngige announced the withdrawal of his presidential ambition, saying he rather remain as a minister. All these happened a few hours after the send forth ceremony they attended at the Villa.

Daily Trust Saturday learned that Buhari had organized the event ahead of FEC before the political appointees could change their minds over the plan to pursue elective positions.

Speaking at the valedictory session, the president said appointments would be made without delay so that the business of governance would not suffer as their departure had created a vacuum that should be filled.

President Buhari said a significant number of them had been sufficiently equipped to aspire to higher elective offices, including the office of the president.
do not doubt that if the next president emerges from among former members of this cabinet, like any other aspirant, ample competence and outstanding service delivery would be on display. This will be part of our legacies to Nigerians,” he said.

The president, who commended the departing public officers for serving the country sacrificially “with dignity honor our’’ had at the last FEC meeting on May 11, 2022, directed that all ministers and other political appointees who aspire to contest for elective offices in the 2023 general elections should resign their current appointments.

Announcing his withdrawal from the presidential race, Ngige promised to stay away from the “internal party processes” of the All Progressives Congress (APC).

In a press statement, the minister noted, “I took this momentous decision firstly in the overall interest of the nation to enable me to concentrate on my job and assist the president and the government; and secondly, for other family reasons,” he said.