The graduated class of 1995 from the Fakunle Comprehensive High School has presented 12 internet enabled computer sets to students of the school in celebration of their 25th anniversary.

The alumni set led by their president, George Martins made the commissioning of the donated items on Friday, December, 18 at the school computer laboratory.

The 1995 set also promised to pay the 2021 jamb registration fee for 15 less privileged students of the school.

The alumni said the distribution of the 15 students would cut across the Art, Science and Commercial departments with five students from each.

During his remark, Martins showed appreciation to Mr Remi Azeez, the national alumni FCHS president for his continual support.

Martins also praised the principal of Fakunle Comprehensive High School for welcoming them with open-hands.

“We’re here to give back to the school a token of 12 internet enabled computer set for the educational improvement of the students,” Martins said.

Martins added that the gesture from the 1995 set is an icing on the cake while assuring them that the alumni would come back to do more.

Dr Mrs Adeagbo, the Director of Schools representing the Honorable Commissioner of Education while delivering her goodwill message expressed her appreciation to the 1995 alumni set for their kind gesture towards the school.

“In our society nowadays, indiscipline is very rampant.

Apart from giving back educational materials to their alma matter she urges the alumni to periodically visit schools to lecture students on how to be courteous for the betterment of our society,” said Adeagbo.

She emphasized that the government of the state sees the alumnus as a major stakeholder; which makes them a significant constituent on the board of governors (BOGs).

Mrs FA Daodu , the principal of the school, described the gesture of the alumni as a perfectly done job stating the utmost importance of computer in education.

“The importance of computer in education cannot be overemphasized as it’s a key element that enhances learning, during the lockdown due to the Coronavirus, the students of Osun State kept learning” she noted.

According to her, the computer system would be put to good use by the students. She appreciated the Governor for bringing back the school name.

On behalf of the teachers and students of the school, she thanked the 1995 alumni set for the provision of the computers. 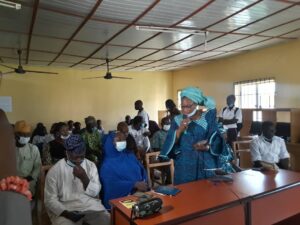 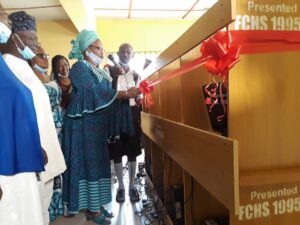