Three school children of same parents were hit by a vehicle along Kajola-Ilesa road in Osun State,

AMILOADED gathered that the accident occurred around 8:00am on Monday when the affected pupils were on their way to school.

According to reports, the children, two boys and a girl were immediately rushed to nearby hospital by the driver after they became unconscious at the accident scene.

One of the victims, sources said, was resuscitated at the hospital, while efforts are on to revive the other two.

As a result, the ugly incident infuriated youths of the Kajola community, who barricaded the busy road in protest.

Motorists and commuters plying the road had a rough experience as they were delayed for hours.

The protesters argued that the government was to be blamed for the accident because there were no bumps on the road to check speeding vehicles.

They urged the state government to construct speed bumps on the road that passes through the community to allow pedestrians, especially school children, cross the road with ease.

A team of policemen was reportedly to have visited the scene of the protest to pacify the youths who set a bonfire on the road, preventing free flow of vehicular movement.

However, the State Commissioner for Works, Remi Omowaiye, has promised that the state government will facilitate construction of speed bumps on the Kajola town axis of the Osogbo-Ilesa road.

He appealed for patience, noting that speed bumps would be constructed but may not be instantly as the state would have to source for asphalt.

He appealed to the community elders to delegate representatives who will meet with officials of the ministry to decide the spots where they want the speed bumps to be constructed. 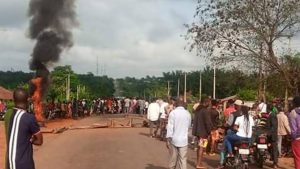