The All Progressives Congress (APC) State Congress Appeal Committee for Osun State has upheld the emergence of Prince Gboyega Famodun as the authentic Chairman of the party in the state, AMILOADED reports.

The five-man Appeal Panel which was constituted by the National Secretariat of the APC also affirmed the victory of other State Officers elected at the Congress held in Osogbo , the Osun Statw capital on Saturday, October 16, 2021.

The latest development was made known by the Chairman of the Appeal Committee, Ambassador Obed Wadzani while briefing newsmen at the APC Secretariat in the state on Sunday.

He revealed that despite report of parallel State Congress held in Osun, the Panel did not receive any petition or appeal since its inauguration on October 21 by the leadership of the party at the National Secretariat, Abuja.

Wadzani explained that the decision of the Panel to affirm the results of the State Congress conducted and supervised by the Gbenga Elegbeleye-led State Congress Committee was therefore taken in the absence of any petition or appeal.

Speaking further, the Appeal Committee Chairman said the Committee came to Osun on the mandate of the national leadership of the party to look into any petition arising from the State Congress.

He said, “We are here on the mandate of the national leadership of the party in Abuja, and this press briefing is to inform you on the purpose why we are here.

“We are here as the members of the Appeal Committee from the national level and I can tell you that there is no appeal or petition whatsoever since the inauguration of the Panel.

“And all the members of the Committee that was inaugurated on the 21st of October were directed to go to the State and meet with the party at the State level if there is any petition to be addressed and I am happy to report that we have been here since yesterday and we are here to address you that we have found none in the state.

“This is the only mechanism that the party leadership had provided for anyone that is aggrieved to seek redress and since there is no petition, the report will be made from what we have recorded.

“Therefore, I will like to take this opportunity to congratulate the State Chairman-elect and all his team for this wonderful work they have been doing. They have done excellently well.

“You have been doing well and there is still work ahead. This is a family affair. In APC, we know ourselves.

“My appeal to the members of the media is to continue to give wide coverage to the activities of the party as you have been doing, particularly on the good and excellent works the Governor, Mr Adegboyega Oyetola has been doing in terms of dividends of democracy to the people of Osun,” Wadzani stated.

Earlier in his welcome address, the APC State Chairman-elect, Prince Gboyega Famodun, promised to put in place workable mechanism that would strengthen the unity and togetherness among members and loyalists of the party.

Famodun who expressed his readiness to embark on immediate reconciliatory process to reunite aggrieved members of the party, said no effort would be spared to collectively return Governor Adegboyega Oyetola for second term.

Asked on the moves the party will take to reach out to aggrieved members, Famodun said, “The perceived aggrieved members of the party are a pressure group who wants one thing or the other but with the steps that would be taken, they will come back and we will remain one family.” 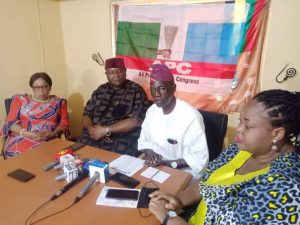