The Senate, on Wednesday, passed for second reading the 2022 Appropriation Bill and adjourned plenary till November 9 for budget defence.

The President of the Senate, Ahmad Lawan, announced the adjournment during plenary.

He referred the Appropriation Bill to the Committee on Appropriation, directing them to report back in four weeks.

The development followed the conclusion of the general principles of the budget, with each senator baring their minds on the contents of the fiscal document. 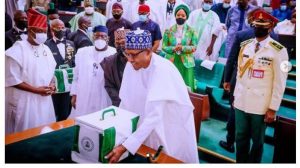