The Nigeria Union of Journalist, OSBC Chapel, is set to honour the Olowu of Kuta, Oba Hammed Oyelude Makama Tegbosun III, as the Life Patron of the union, AMILOADED, reports.

The Osun monarch will be honoured at an event slated for August, 11, 2021, at the OSBC station in Ile-Awiye, Oke-Baale, Osogbo, the Osun State capital.

The traditional ruler was born in 1964 at kuta in the Aiyedire Local Government Area of Osun State.

Oba Hammed Oyelude’s parent was a direct descent of the founder of kuta.

He ascended the throne of his forefathers on September, 15, 2012.

The kingdom has been benefiting more under his reign with great achievements and numerous legacy projects.

Oba  Oyelude has been a main facilitator to many seminars and conference  organised by different  bodies and organisations in Nigeria.

The Osun monarch has also been  a regular invitee to many radio and television programs on Advocacy for The military and youth empowerment.

The Olowu of Kuta has remained the only King  consistent Supporter of The Nigerian Army and security agencies through his massive campaign of advocacy. 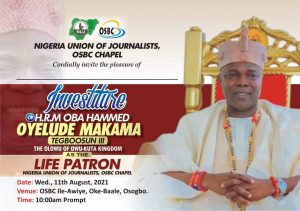