Subscribers under the aegis of the National Association of Telecoms Subscribers have called on the Minister of Communications and Digital Economy, Isa Pantami, to step down in spite of the extension of the deadline for National Identity Number-Subscriber Identity Module linkage.

Pantami, who has been under fire of late over his past extremist pro-Islamist comments, announced the postponement of the deadline to June 30 based on the request by stakeholders.

The President, NATCOMS, Adeolu Ogunbanjo, while appreciating the minister for the extension, admonished Pantami to step down and be investigated.

He said it was necessary for the minister to resign just as the former Finance Minister, Kemi Adeosun, had done after she was accused of forging her National Youth Service Corps exemption certificate.

Ogunbanjo said, “For now, he should step aside just like Adeosun did and allow investigation to continue. If he is cleared, he can come back as minister.

“We appreciate him for extending the deadline, but he has a moral obligation to resign so investigation can be devoid of partiality. He should do the honourable thing and be investigated.”

Buhari’s sincerity in fighting Boko Haram insurgency questionable given his support for Pantami — Col Stan-Labo
According to him, the number of Nigerians that have obtained their NINs translates to 190 million mobile numbers, since empirical evidence suggests that each unique NIN maps three to four phone lines.

He added, “The much awaited Android enrolment system is now ready for deployment and this has the potential to significantly accelerate the speed and ease of enrolments.

“Furthermore, the telecom providers and other enrolment agents have also opened several centres across the country to make it easier for eligible citizens and residents to obtain and link their NINs.”

According to Punch, The minister advised Nigerians to take advantage of the extension. 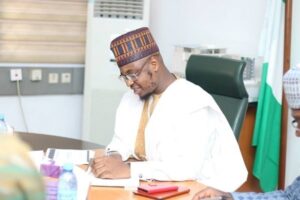