The Peoples Democratic Party(PDP) in Osun State has thrown its weight behind the move to hold the South-West Zonal Congress of the party in the state.

The Osun State chapter of the party made this known in a statement signed and made available to AMILOADED by the state chairman, Hon. Sunday Bisi, on Thursday.

The statement read, “The Osun State Chapter of the Peoples Democratic Party welcomes with warmness, the decision of the National Working Committee led by Prince Uche Secondus, leaders and other critical stakeholders of our great party to schedule the South-West Zonal Congress in Osogbo, the Osun State Capital.

“We especially appreciate the doggedness of our leaders in the South-West for demonstrating exemplary capacity in addressing grey areas leading to the congress on Monday, 12th of April, 2021.

“In the course of last minute preparations towards the congress, all stakeholders, contestants and delegates alike, are enjoined to stick to democratic rules and tenets the PDP is known for as a party and the towering history of the southwest as a bastion of peace and political maturity.

“On our part as the host state, we assure our party men and women across the country of uncompromising hospitality in an atmosphere of camaraderie.

“Members of our party in the state are also enjoined to extend hands of friendship to the guests, who would most likely be visiting the state for the first time.

“Once again, on behalf of my colleagues in the State Working Committee, leaders and members of the Osun State Chapter of the PDP, I welcome the decision of the national office of our party with open arms, just as we look forward to a fruitful congress.” 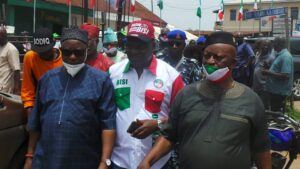