Some Nigerians on Wednesday expressed divergent views on the extension of the National Identification Number (NIN) and Subscribers Identification Module (SIM) linkage by the Federal government.

The subscribers and vendors reacted in separate interviews with the News Agency of Nigeria (NAN) in Lagos.

NAN reports that April 6, was supposed to be the deadline for Nigerians to link their NINs to their SIM cards but the exercise was extended again by one month until May 6.

Mr Thomas Adegoke, a self employed, expressed excitement at the extension saying that it had been difficult to get registered due to the crowds at the enrollment centres.

Adegoke said that it was his desire to get the NIN because apart from linking it to his SIM, it could be used for other forms of identification.

“The extension is a blessing for those of us who are yet to be registered and link our SIMS.’’

Mrs Vivian Ilechukwu, another respondent, said that the extension was appreciated because it would enable her to register her child for NIN to be eligible for the Joint Admissions and Matriculation Board (JAMB) examination.

Ilechukwu said that efforts had been made severally to get the child registered but due to school activities it has been difficult but with the extension it would be possible.

A SIM vendor, Miss Blessing Okon, expressed disappointment that the extension was putting a hold on the source of her livelihood because nothing would be done except the registration was done.

Okon said that since the exercise began business had dropped and people were eager to get started again after the registration.

She, however, advised the people to take advantage of the extension to get registered so that business would start booming.

She also pleaded that more enrollment centres be opened so as to get more people registered in the shortest time possible.

The move by the Federal Government to get citizens to secure the NIN and link them with their SIM cards was first announced in December 2020.

A two-week period was prescribed for the exercise, but after it was clear that the time window was insufficient the government, however, extended it to February, and then April 6. (NAN) 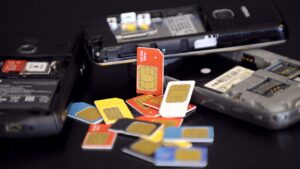