The World Trade Organisation (WTO) is the only International Organisation dealing with the global rules of trade. Its main function is to ensure that trade flows as smoothly, predictably and freely as possible between nations.

WTO Director-General (DG), Dr. Ngozi Okonjo-Iweala assumed office on March 1st 2021, as the first female and first African to head the Organisation. She is steadfast in resolving controversial issues as “industrial subsidies, SOEs [state-owned enterprises] and special and differen 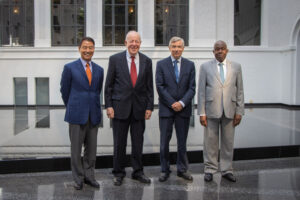 It was reported that she has given notice to the four Deputy Directors-General (DDGs) that their tenures will not be continued past this month.