The remaining students of Federal College of Forestry Mechanisation (FCFM), Afaka in the Mando area of Kaduna State, have been evacuated to the 1 Division Garrison Command of the Nigerian Army in Ribadu Cantonment.

Amiloaded had reported how armed men broke into the school and abducted some students.

A military source told Daily Trust that but for the efforts of personnel of the Nigerian Air Force and troops of 1 Division Nigerian Army Headquarters, Kaduna, the attack would have been worse.

The source, who did not want to be named, said some students were rescued during the attack but the kidnappers made away with an unconfirmed number of students.

ASP Mohammed Jalige, Police Public Relations Officer in Kaduna, had earlier confirmed the incident to Daily Trust but said the number of abducted students was unknown.

“We have no details of the number of students,” he had told our correspondent, adding that the Police were working with the Nigerian Army to trace the kidnappers and rescue the students. 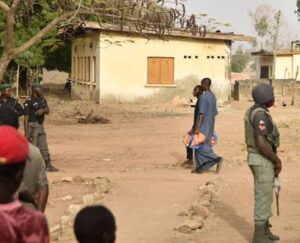