A Singaporean father’s worry about his girl going to a Baptist college quickly vanished after the school authorities said they were changing the dress code to accommodate his hijabi daughter, World Of Buzz reported.

“When Sumaiyah joined the local Baptist College, we were informed that she was the first hijabi student in the middle high school college,” Syahrom Rahmad, a Singaporean Muslim father who is currently living in Australia, said.

“The principal of the college took the effort to prepare a praying area for Sumaiyah.”

He elaborated further his wife had a discussion with the principal and they proposed to the board members that hijab and clothing that cover aurat (private parts) be included as part of the school uniform.

The board members agreed on the proposal and starting 2020, modest clothing like black leggings, white long sleeve tops, and white or black hijab will be included as part of the school uniform.

Islam sees hijab as an obligatory code of dress, not a religious symbol displaying one’s affiliations.

According to the 2016 Australian Census, the number of Muslim in Australia constituted 604,200 people, or 2.6% of the total Australian population, an increase of over 15% of its previous population share of 2.2% reported in the previous census 5 years. 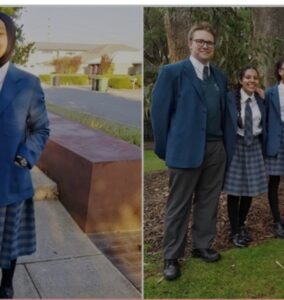