A 15-year-old Nigerian student recently made the nation proud as she emerged the winner of the Global Open Mathematics Tournament, beating representatives from Europe, Africa, America, Asia and Australia.

Faith Odunsi, an SS3 student from Ijebu in Ogun state shared her experience winning the global competition in an interview with The Punch.

While narrating how she excelled in different stages of the contest to emerge the overall winner, revealed that winning the “tough competition” made her happy and honoured.

”In the first stage, there was a computer-based test and we had to answer many questions in one hour. My score in the test was 66. The second stage took the same format and I also scored 66.

“The quarter and semi-finals were on Microsoft themes. We were asked questions and we put in our answers; the first to put in the correct answers got 10 points,” she said.

Speaking on how she prepared, the math genius said she made sure the competition did not affect her academic activities. So, it’s after the school period that she had another class with her teacher who coached her for the contest. She also studied at night from 11pm to 12am.

As the winner of the contest, the young Nigerian was presented with a monetary award of $1,000 (N379,000). She added that the organisers said they would come for the official presentation of the award.

Before winning the global contest, Faith had in 2018 set a record in Cowbellpedia by answering 19 questions in 60 seconds.

She intends to study Computer Engineering for her tertiary education. 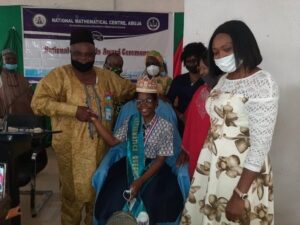 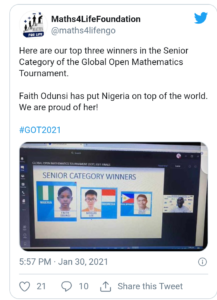 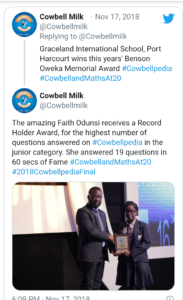