A Nigerian man has dragged a lady before the Customary Court in Kaduna over failure to show up at his apartment.

According to reports, the man dragged the lady to court to retrieve the N5,000 he sent to her after she failed to show up at his apartment.

”So my guy sent 5k to this babe to come over from zaria to kaduna only for her to start giving silly excuses and try to play him . To cut story short Baba carry matter go court them send back him money via Court ordeRight move or not ?”

See the purported court paper below; 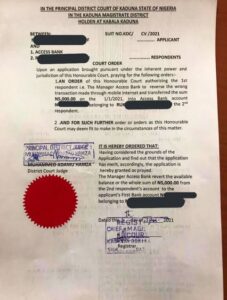