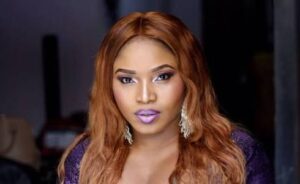 The Nollywood Actress, Halima Abubakar is of the opinion that sex without consent in a marriage is rape. In an interview with Saturday Beats, she said, “There have been reports that some homes broke up because of sex but I am sorry to say this, some people are limited in their sexual expression because of religion. Some women just lie down there (during sex) because they are scared of expressing themselves. But, men can encourage their women to be more expressive, without using abusive languages”.
“Also, if the woman is not in the mood, her wishes should be respected. There are other things, aside from sex, that a man should concern himself with. I consider it a turn off for a man to like sex too much. I feel some men are insatiable (sexually). Some people have said that when one is legally married, there is nothing like rape. But, I don’t agree with that. Any sex that is not consensual is rape. The woman could even get injured in the process. Would we still call that pleasure? One’s husband should not forcefully have sex with one. I am not saying a man should not have sex, but he should control his appetite for it so that it doesn’t lead to his destruction. I feel the wife can report this kind of case if she cannot talk to the husband, but should go to the family first. If he does not change, then she should take it to the authorities.”

She stated that any no consensual sex, be it in marriages or outside should be considered rape and be reported to the authorities and also, Marriages doesn’t give any man the right to have sex with any female forcefully and the opinion of some people that rape doesn’t exist in marriages should be erased.
She also added that rape should be treated as a pandemic just as COVID-19 and castration should be the ideal punishment for any rapist.