The Covid-19 pandemic dealt a huge blow on individuals , corporations and governments. The second wave of Covid-19 did not hinder the celebration of Christmas across the world.

Billions of people of other faith also joined Christians to celebrate the birth of Christ.
Famous Muslim footballers were not left out. This thread highlights how five of our best muslim football players marked Christmas with their Christian fans.

Zidane is a Muslim of Algerian Kabyle descent. His parents, Smaïl and Malika, emigrated to Paris from the village of Aguemoune in the Berber-speaking region of Kabylie in northern Algeria in 1953 before the start of the Algerian War.
In the picture, Zidane stood before a Christmas tree decorated naturally with snow . His caption was simply Joyeux Noël which means Merry Christmas in French.

The Balon d’or finalist and Liverpool danger man who hails from Egypt posted Christmas pictures on his Instagram and Twitter accounts. Mohamed Salah is a devout Muslim who celebrates most of his goals by laying in the prostrate position to thank God in sujud.

The picture shows Salah and his family fully dressed in Christmas robes while admiring a Christmas tree.

Ozil is a German professional footballer who plays as an attacking midfielder for Premier League club Arsenal.

He played a vital role in the midfield for the German machines in the 2014 Fifa World Cup which Germany won. Ozil is a devout Muslim and has openly criticized the treatment of Uighur Muslims in China.

The German shared a picture near a Christmas tree and wished his fans a “Merry Christmas” and added that humans must look beyond religious differences.

Yaya Touré who is often regarded as one of the best footballers from Africa is a devout Muslim. He won the African cup of Nations (AFCON) for Ivory Coast in 2015 after failing as runner up in two previous editions. He was instrumental in La Liga side FC Barcelona and Premier League team Manchester City before moving to China to conclude his legendary career.
Touré shared his Christmas picture on Instagram.

Achraf Hakimi Mouh is a Moroccan professional footballer who plays as a full-back for Serie A club Inter Milan and the Morocco national team.

Hakimi is a devout Muslim . The 23 year old footballer shared a picture of him with his girlfriend and baby though the face of his baby was not revealed. 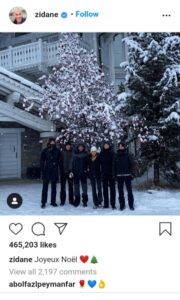 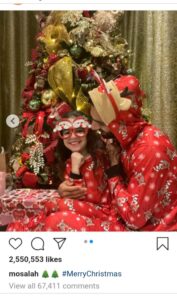 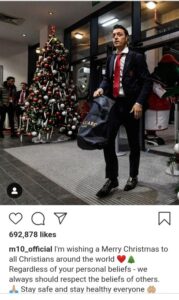 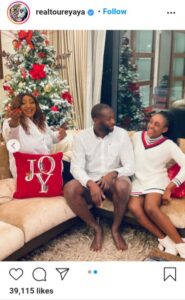 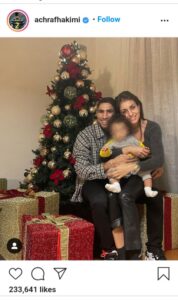