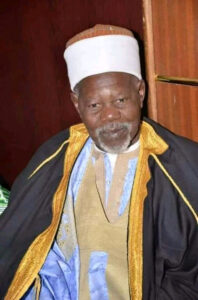 Condolence messages have continued to pour in over the death of the first former Military Governor of the defunct North-Western State, Alhaji Usman Farouk who died at the age 85 at the Federal Teaching Hospital, Gombe at about 1:00am on Friday where he was receiving treatment for an undisclosed ailment.

AMILOADED gathered that his funeral prayer was held at the Emir of Gombe’s palace at 4:00pm on Friday.

President Muhammadu Buhari, Governor of Gombe State, Alhaji Muhammadu Inuwa Yahaya, Sokoto State Government and among others, commiserating with the family over their loss.

President Buhari in a statement issued yesterday in Abuja by Mr Femi Adesina, his Special Adviser on Media and Publicity, commiserated with the wife of the deceased, Sen. Zaynab Kure, her children, all the Kure family and the Nupe people on the demise of their illustrious son.

President Buhari in a statement by Senior Special Assistant to the President on Media and Publicity, Mallam Garba Shehu, has commiserated with the family and friends of first Military Governor of the defunct North Western State, Alhaji Usman Faruk, over his death.

“President Muhammadu Buhari condoles with the family, friends and associates of the first Military Governor of North Western State, Alhaji Usman Faruk, over the passing of the retired Commissioner of Police.

“The President also extends condolences to the government and people of Gombe State, observing that their eminent son and Jarman Gombe, dedicated his life and energy to the unity of the country.

“President Buhari also notes Alhaji Faruk’s commitment to the development of his community even after retirement, stressing that he remained an epitome of kindness and humility.

“As the remains of the former crack police detective and author are interred Friday, the President prays that Allah will comfort all who mourn the octogenarian statesman and accept his soul,” the statement said.

This was contained in a statement signed by his Senior Special Assistant (Media and Publicity), Ismaila Uba Misilli.

The Governor led a government delegation in attendance at the funeral prayer for the deceased, which held at the Modibbo Bubayero Central Mosque, Emir’s Palace, Gombe.
In a message of condolence, the Governor described the late former Commissioner of police as a complete gentleman, distinguished officer and accomplished personality who sacrificed a lot for the unity, progress and development of the nation and left behind good memories that will continue to linger on for a long time to come.

“Gombe State has indeed lost a great pillar and respected elder. He was an astute officer, well respected for his humility, exemplary leadership and commitment to the unity and development of Gombe State and Nigeria in general”.
” We will continue to remember him for his fatherly disposition and excellent deeds both in service and retirement, and in particular for his service to the community, the state and nation in a variety of roles”.

“On behalf of the government and people of Gombe State, we convey our sincere condolences to his immediate family and associates over this great loss. May Allah reward his good deeds with Aljannat Firdaus”.

The Sokoto State Government also described the late Military Governor of the old North-Western State as the architect of the development in the state.

A statement signed by the acting governor of the state who is also the state deputy Governor, Honourable Manir Muhammad Dan’iya, described his death as a sober and heart wrenching news for the state.

According to the acting governor, “As we announce the idea of Governor Aminu Waziri Tambuwal going into self-isolation earlier today, the sober and heart-wrenching news of the death of the pioneer governor of old Sokoto State, Commissioner of Police (retired) and the erstwhile Jarman Gombe, Alhaji Usman Faruk, came to us.

“As the first Military Governor of North-Western State, comprising of the present day Kebbi, Niger, Sokoto and Zamfara States, from 1967 to 1975, he laid the foundation for the development of our state long after it was weaned from the tutelage of the late Sardauna of Sokoto when it was subsumed as part of the monolithic Northern State.

“His, was the first budget in 1971 that started the old North-Western state on its journey to fiscal clarity and discipline. The vision and depth of that document was projected to catapult the state on to a trajectory of development envisaged to last four years.

This helped the old Sokoto state, split from today’s Niger State, that was born not too long after he left office.”

While describing his relationship with the current Amanyanabo of Town Brass in Rivers State, Dan’iya further said,

A true patriot, he celebrated the end of the Nigerian Civil War, positing that its end was the “triumph of truth and valour over greed and ambition.

“He will also be remembered for his canvassing support for the development of national security, especially the Nigerian Police in which he served meritoriously. He advocated for the Force’s adequate funding, arguing that the poor pay and delapidated equipment of the police could not be justified, thus the rise in the state of insecurity in the country, which claimed the life of his sixth son, an Assistant Superintendent of Police, who was killed by Boko Haram insurgents.

“Taking cue from the late Sardauna long after he left office, Alhaji Faruk sank his energy into calling for the establishment of a commodity marketing board in the North. He wanted such a board to have dual responsibilities of fixing and controlling the prices of produce and animals such as cows, goats and sheep.

“In addition, he thought the board should also be responsible for the preservation of produce at times of need and establish processing companies for perishable produce such as tomatoes and other vegetables.

A devout faithful, he was of the view that “no good Muslim will ever accept any human directive which contravenes the laws of Allah,” just as he kicked against the proliferation of abortion drugs and devices, which he said would lead to “an earthquake of moral laxity,” if left unchecked.

“I also express our sympathy to.his respected family, while praying to Allah to grant them the courage to bear the irreparable loss.

“No doubt, the North has lost one of its fundamental pillars. We pray to Allah to grant him Aljanna Firdausi,” he added.

Gombe renowned politician and philanthropist, Dr. Jamil Isyaku Gwamna has also expressed deep sadness over the death of the former Governor of the defunct North-western State, Alhaji Usman Farouk, saying Nigeria has lost one of its great patriots.

The condolence is contained in a statement signed by his aide, Sani Abubakar Banki.

According to the statement, Gwamna described late Usman Farouk as a de-tribalized and patriot who served the nation diligently during his lifetime.

“I woke up this morning with the sad news of the death of our father, elder statesman and former Governor of the defunct North-western, Alh. Usman Faruk (Jarman Gombe).

“This is really a great loss not only to his family, state but to the entire nation in general which he has saved diligently during his life time, expecially in the Nigerian Police Force where he rose to the rank of Commissioner of Police.

“Late Jarma was a de-tribalized Nigerian who has worked tirelessly for the unity and peaceful coexistence of this great Country.

“His role in the creation of Gombe State will never be forgotten. He’ll surely be remembered for his selfless service to humanity and religious development.

“May Allah (SWT) forgive his shortcomings and grant him Aljannah Firdaus.