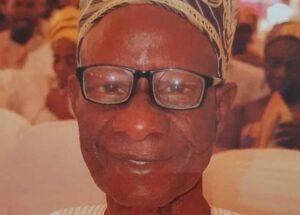 The All Progressive Congress (APC) have been thrown into morning again following the death of a National leader of the party in Oyo State, Samuel Ojebode.

The Renowned Awoist, died at the age of 87 on Saturday.

He was the authority of the APC in Oyo Federal Constituency.

His death came 5 months after the death of his co-contemporaries in Oyo progressive circle, Chief Adelere, Chief Samuel Farinu and Chief Samuel Akindele.

Though details of his death were sketchy as at press time, Ojebode was said to have breathed his last around 5pm on Saturday.

Teslim Folarin, who represents Oyo Central in the Senate, has expressed sorrow over the death.

In a statement on Sunday by his spokesman, Yekeen Olaniyi, Folarin said the exit was another great loss to the progressives family in Nigeria.

The lawmaker noted that Ojebode would be missed by the APC and Oyo people.

Folarin recalled that his contributions to the party and his electoral victory in 2019.

“Baba’s last most crucial political assignment on earth was marked with monumental electoral victories as he delivered House of Assembly seats, House of Representatives seats and Oyo Central Senatorial seat to APC. He hosted peaceful, fruitful and rancor-free APC meetings.

“He was an exemplary leader, considering his boldness, oratory prowess, bluntness, integrity and dexterity. I will miss Baba. He was quite steadfast and dogged in defence of good governance and his death has robbed the progressive family of one of its eloquent defenders.”

Folarin commiserated with the family, Alaafin of Oyo, Oba Lamidi Adeyemi, Dr Sokan Ojebode, founder of Atiba University, and others.

He prayed that Ojebode’s soul finds solace in the bosom of God.