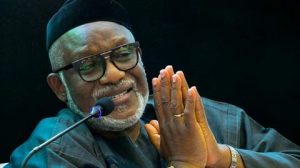 Kolawole Vincent Oluwatobi, a blogger, Sports and public affairs analyst from Akure, Ondo state capital has urged the governor of the state, Rotimi Akeredolu to intervene and save the state football club, Sunshine Star.

Oluwatobi said this in a letter titled ‘Sunshine stars of Akure is derailing, going off the line’ which was made available to AMILOADED.

The analyst said players of Sunshine Stars have been lamenting unpaid salaries, saying they’ve been passing through hardship amid Covid-19 pandemic.

He added that the players and officials of the team are being owed four months’ salaries by the state.

According to him, the players of the team also said they have been going through hell and battling hard to feed, why some say they can’t afford their rent anymore.

“All these problems are not a good one coming at this time when the NPFL is starting in few weeks, the state government under the leadership of Governor Rotimi Akeredolu need to intervene very quickly so as to boost the morale of the boys for the upcoming season, if not the team is sitting on a keg of gunpowder, the team board needs to fix the issue and other important issues before the NPFL start fully,” Oluwatobi said.

The sports analyst further noted that if care is not taken on the matter and going by the groaning of the players, sunshine stars may have to battle relegation this coming season.

“They must make hay while the Sunshine, for the Stars to Shine Again,” he noted.